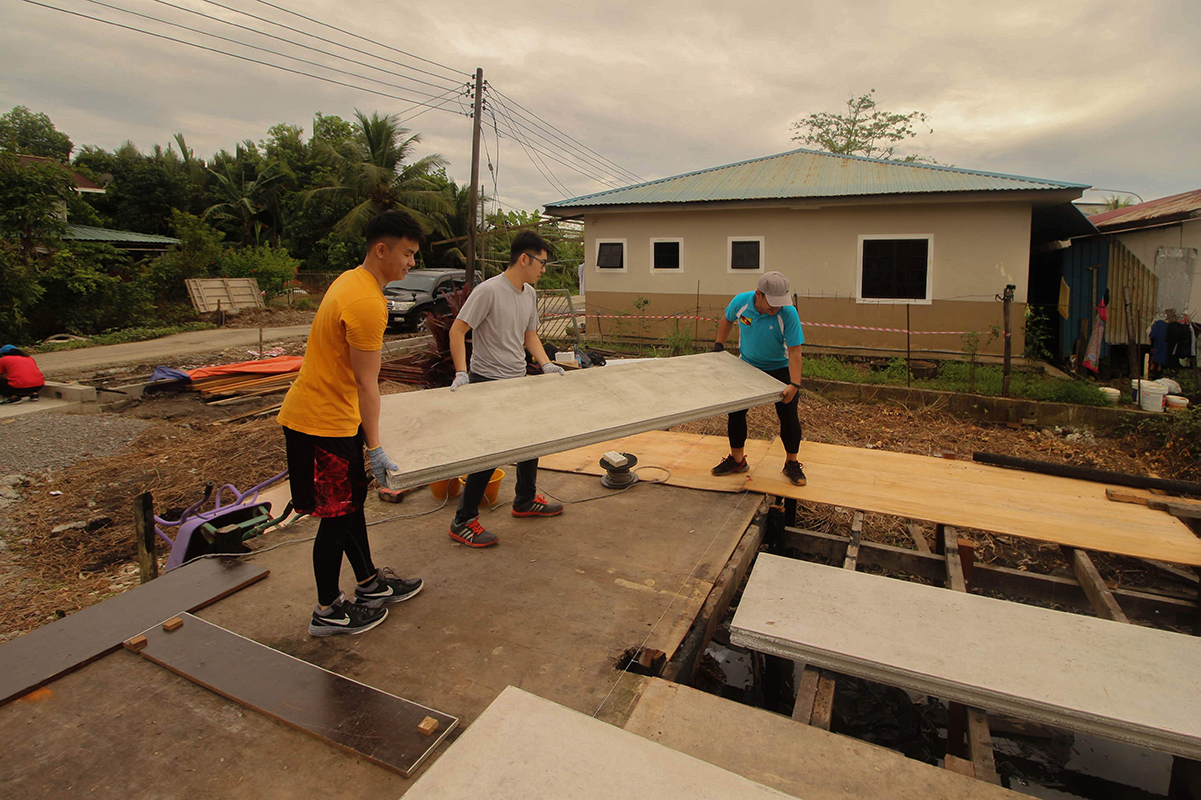 Swinburne Sarawak is the Malaysian campus of Swinburne University of Technology sporting a moderately sized campus in the city of Kuching, Sarawak. During the winter term, the campus is quietly occupied by two types of students intent on finishing their degree faster, and students needing to make up credits for a failed unit.

Social Innovation projects in Sarawak recieve limited support from local Sarawakian and Malaysian government. Requests to obtain information about various schemes for NGO's project. The need of the NGO, Breakthrough Networks SDN BHD. for raw data about the people they wish to provide programs supporting educational outcomes. After forming a partership with Swinburne to both provide a winter semester program for the faculty of business.

The program has 2 main goals to achieve for the residents in a squatter resettlement area near the Kuching International airport. 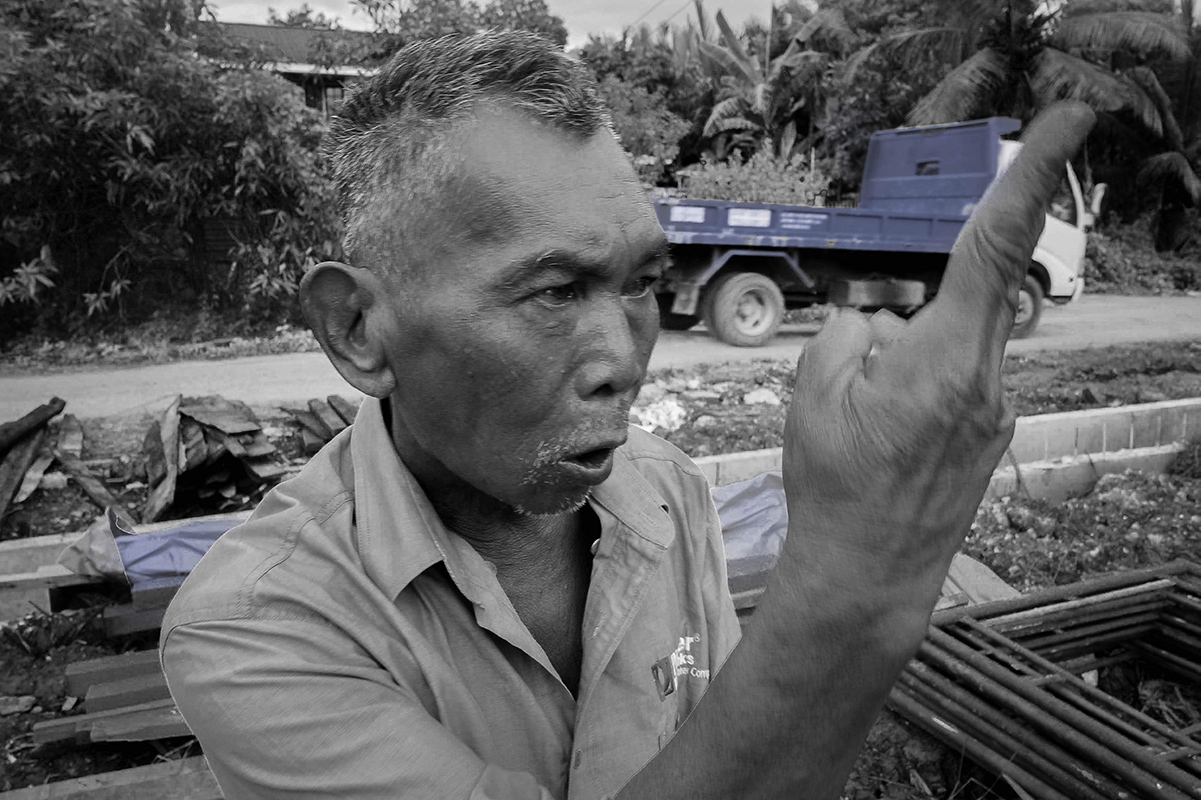 Mr Entuny pictured speaking about lost family members and the partial loss of his existing home to fire.

Mr Entuny is a local resident who has suffered from several family losses, and takes medication for ongoing mental illness. Pictured below is the beginning of the project 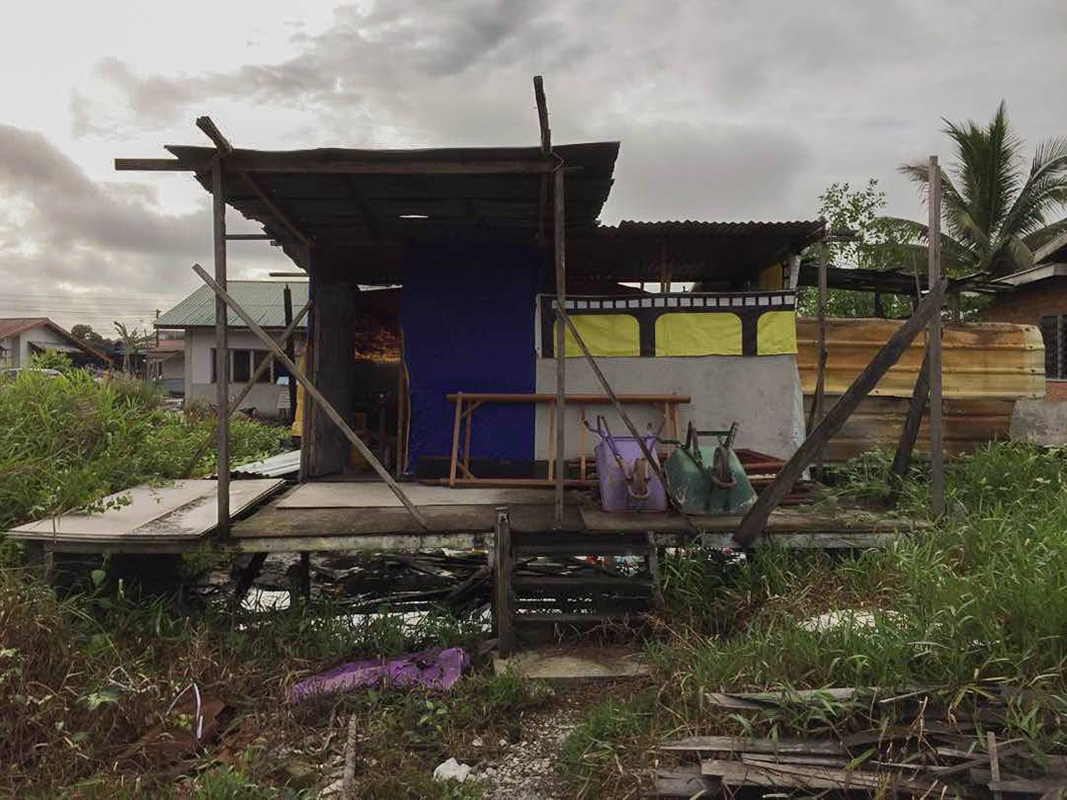 Home before intervention by Breakthrough Networks

Supported by his only surviving family member and neighbour, Mr Entuny has one of the worse homes in the area, chosen after evaluation by Breakthrough volunteers based on need. General litter however, as show below the house is common in the Kampung. Most of the self-built structures are built on stilts above marshy ground prone to flooding.

Format of the Unit

ENT30014 has it's own website where the format and outcomes of the course are described in detail. Generally, two logbooks and a Community Needs Assessment with associated presentation form the assessment for the unit. Lectures by the Swinburne staff become less common as guest lecturers from Breakthrough, Malaysian universities and practicing professionals involved with Antropology and the social sciences are common.
On the other of two contact days per week students travelled to aid with construction of the house.
In a student's own time a series of interviews were conducted with local residents evaluating their educational needs, through a series of informal conversations, a survey and observations about the dwellings and people themselves.
A qualitative research approach is covered in brief detail, though quantative methods are readily accepted and the use of even basic statistical techniques gives the investigation a well founded basis from which to build strong recommendations.

The unit allows an individual student to bring and develop their skillset in a team context in order to evaluate the needs of the Kampung Stutong Baru residents.

Classrooms, Lectures and the General Environment

A sense of formality pervades all contact in a classroom environmet. The lack of class engagement is roughly at a typical Australian University standard, however this behaviour seems to be a sign of the respect of the more formal authority of lecturers rather than as a sign of indifference.
Class presentations also adopt a more formal tone; it's common for students to dress Black-Tie formal for even 3 minute presentations.
Observing from a foreigner's perspective the work ethic of the average student is at a level where most accept the difficulty of D & HD grades as unattainable or not worth the time or effort. Higher grades in the 90+ range seem to be far rarer than in Australia, even for more motivated students. 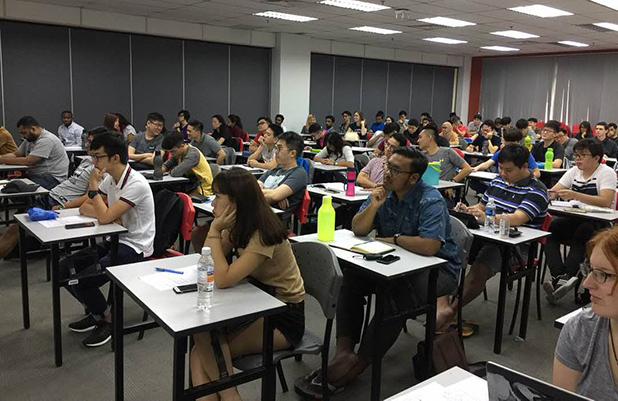 In the absence of rigorous marking guides and available feedback, a student can instead rely on relationships, extra credit and indicating achievement generally within the scope of the subject through extracurricular activities and participation. Volunteering for additional duties - especially presentations, being known by staff and attempting to obtain feedback are all behaviours that seemed to contribute positively to grade attainment on top of the regular coursework. This was definitely interesting and a point of note, as these behaviours in Australia definitely don't appear to have as significant of an effect.

As the weeks progressed, students headed out to the Kampung Stutong Baru settlement to work on Entuny's home and conduct interviews. Each of the groups of students aided local tradesmen, and despite an almost complete lack of experience with manual labour, learned to use basic tools such as saws, drills, hammers, measuring tape and grass cutting scythes. Health and saftey in Malaysia is most definitely approached in a laid-back way, where warnings and evaluations of risk and precautions taken to avoid all kinds of strain and injury are implemented to a lesser degree than in Australia, despite having legislation granding certain worker rights.

Each day of attendance another milestone was met, and progress on the structure was readily seen. Quickly the existing foundations were strengthened, a lightweight concrete block flooring installed and in a matter of days the light C-section steel frame and trusses were installed. Duties continued to develop, providing painting, concreting and grouting experience in the weeks to come, finishing the internals.

Mr Entuny now enjoys his home, far safer and more complete than the makeshift hut he had erected before. As part of a housewarming, several of the students represented the student workforce that had been contributing to the construction. 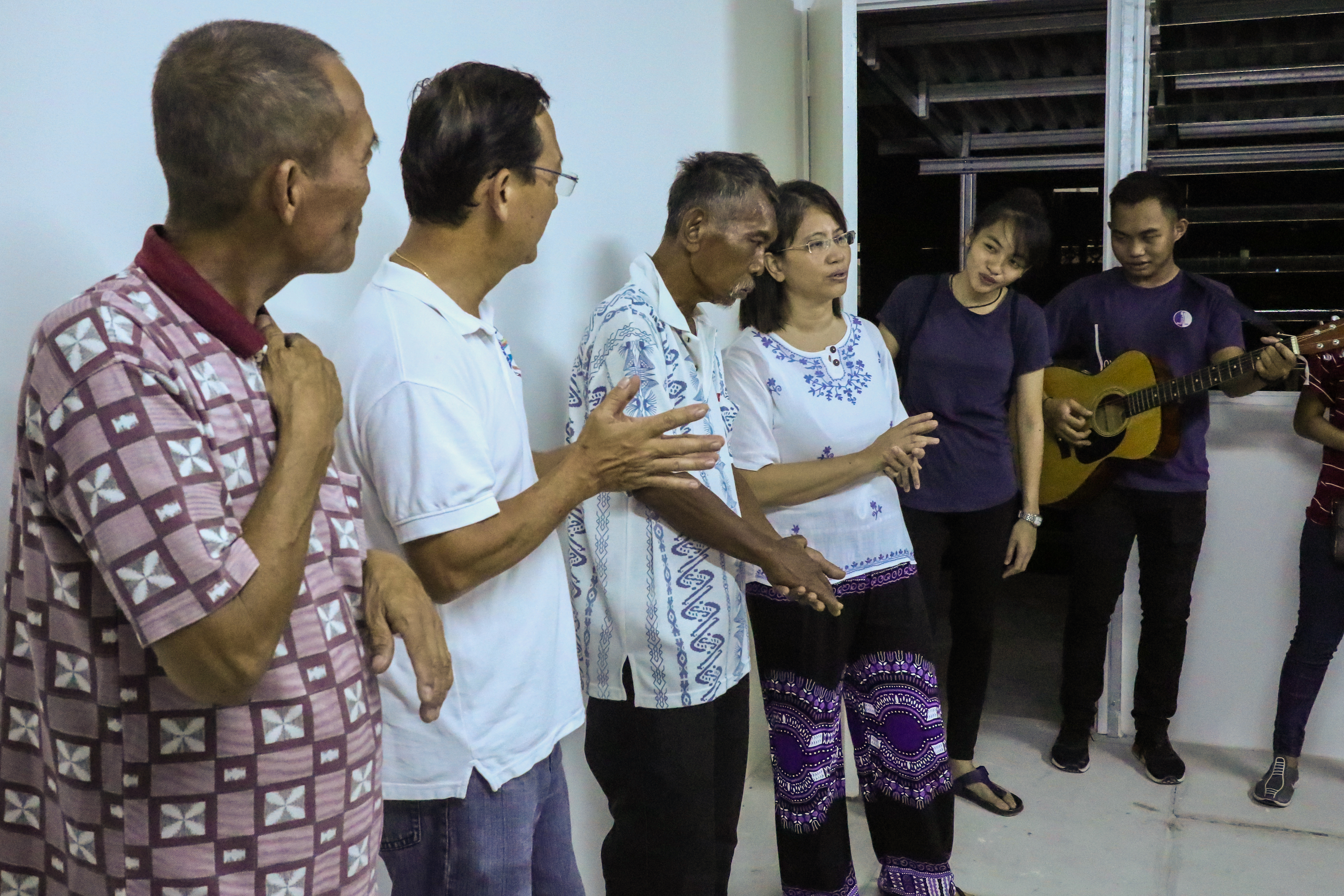 Entuny reached out to his community and invited several families to the houswarming - among which was a neighbour.
The neighbour with the smallest of English, some Malay and fluent in the local Iban dialect. After some translation help and a lot of back and forth, we established that this man had been observing the student's progress with the house, and was readily able to remember when we had been attending the site. The tight knit relationship between the members in the community were more evident than ever during the celebration. 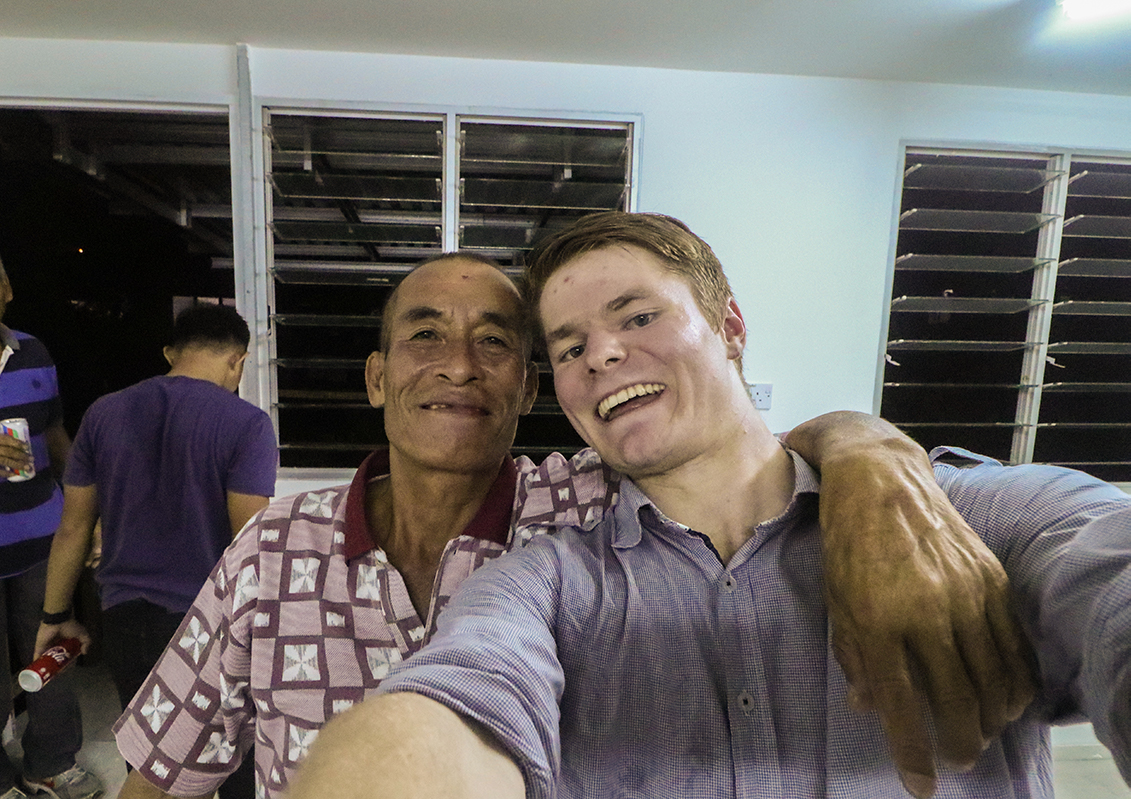 A friendly neighbour loves the camera, the limelight and presenting - even if he can't really speak the language. Love the effort, insipring to watch

With the various local foods on offer, Entuny's Neighbour was eager to share some of his culture with the outsider. Persistently, one by one members of the Austrlaian group were coached on Iban ettiquite. After several tries "Nyamai" - Delicious and various other words were translated with the help of local students and Breakthrough staff. It was really easy to get a lot of engagement as photographer for the event, as myself and other students had not only delivered something very positive to this community but were also willing to celebrate with them. 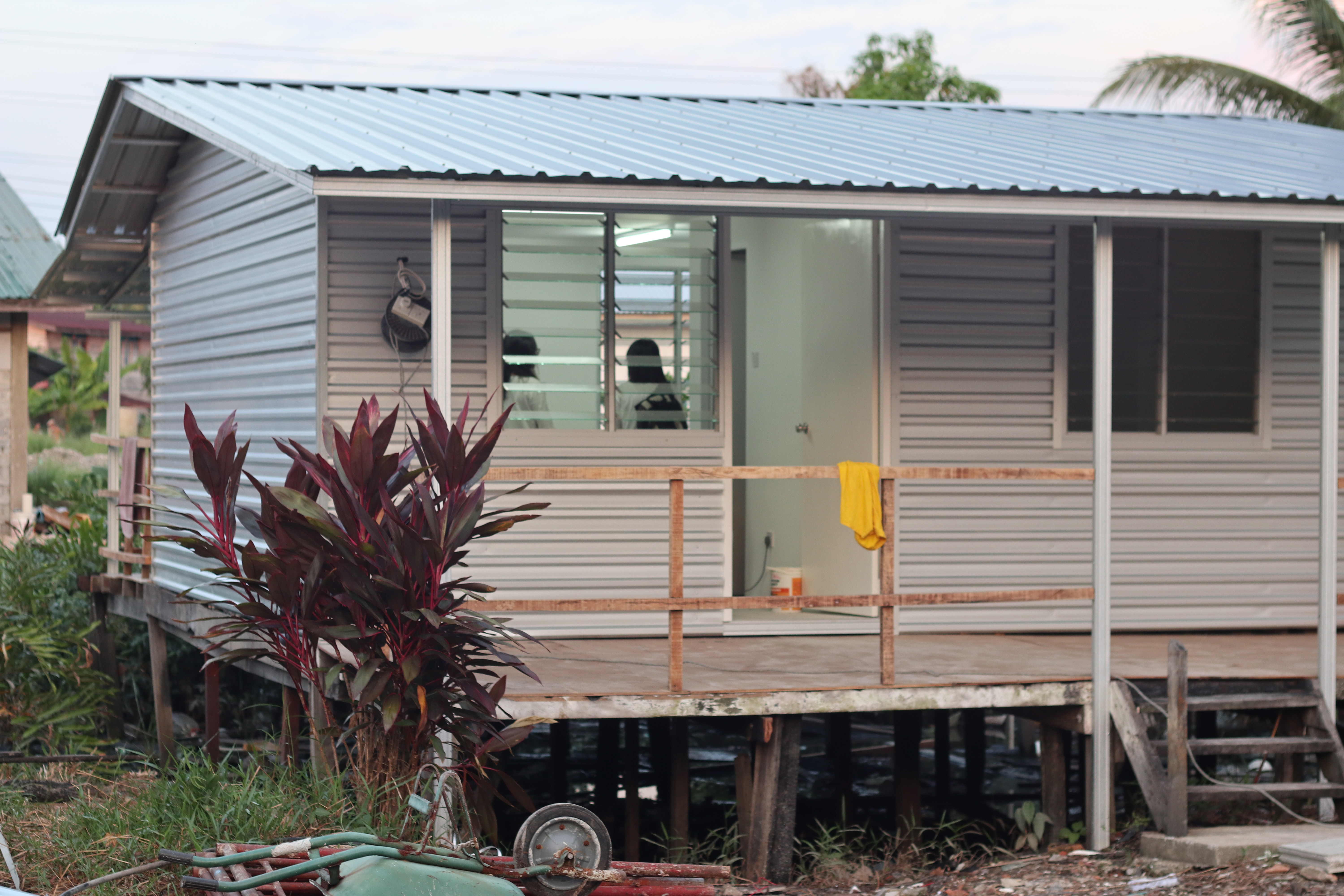 Finished house about to host the housewarming gathering

Community and its needs

As we were made so keenly aware by Mr Entuny's interactions, the tight knit communities present within the Stutong Baru Area depend on each other. As part of assessing the educational needs of the community, following our excursions to the worksite groups conducted several interviews of the residents of Lorong 17. Here the people lived in stilted houses, often with the protection of dogs obviously starved, wounded from the frequent fighting or sapped of their energy by a rough mange over their small bodies. Needless to say, the guards worked, and our interviews were conducted in more welcoming areas.

It became evident that ethnic groups tended to stick together. There exists a sharp divide between the Iban, Bidayu and Chinese lorongs, with similar separation between the Buddhist and Christian groups. The division, while obvious did not elicit a feeling of opposiiton to any other ethnic group in the Kampung, however the division seemed to arise out of convience and familiarity.

Being an Australian of European descent, the individuals in the communities regarded my presence as somewhat of a spectacle. Whilst walking around, doing shopping or engaging in any of the less dense tourist centres I personally got used to blatant staring. Others found this behaviour largely disconcerting, however I found it to be somewhat of a novelty, and didn't feel like it was at all to my detriment.

The grand result of the social innovation project was a man's home, a direction for a NGO to help the local community and the personal learning about a range of circumstances in another environment. The unit definitely is a well run unit which will force any participants to learn about different ways of living and working, and will additionally require any student to re-evaluate how they attain academic success.
This unit will definitely suit the needs of some students more than others, and while not being in my primary discipline of computer science, the experience living in Malaysia as a while and participating in the winter program was something I would choose again.